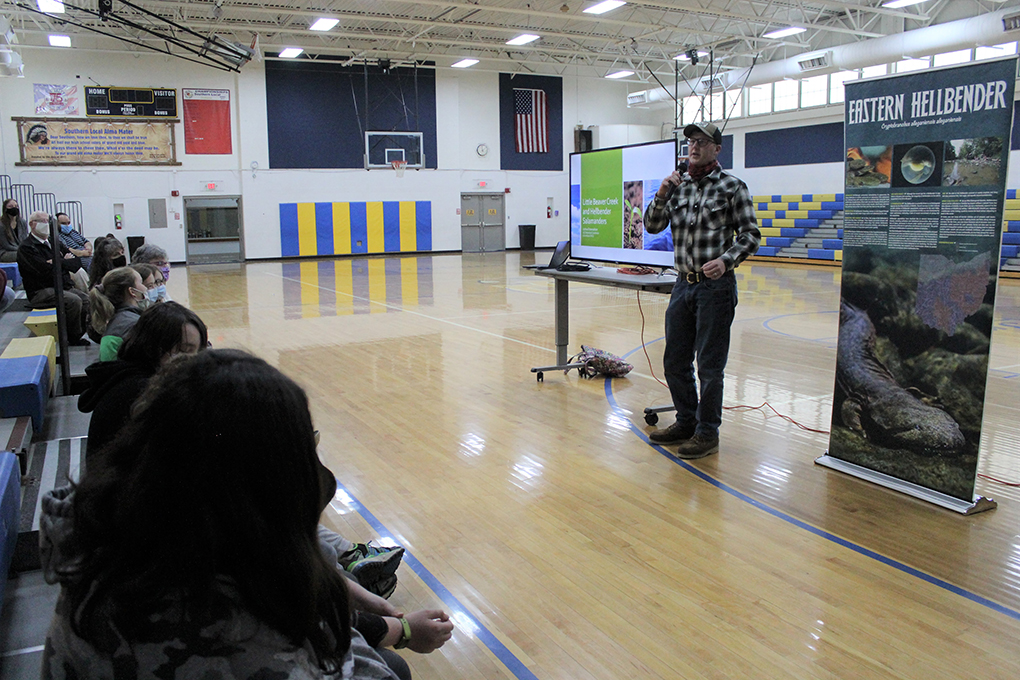 SALINEVILLE-Southern Local Elementary fifth-graders are teaming up with high school juniors to help solve a wildlife conundrum-- how to save the Eastern Hellbender Salamander from going into extinction.

CCESC secured a $54,000 initial grant last year through the Ohio Environmental Protection Agency and is collaborating with SilverApple, which provides opportunities as a midpoint between businesses and schools, and the county SWCD while also incorporating resources from Ohio Project WET and Project Wild to help introduce STEM (science, technology, engineering and math) concepts to students. Leaders said the grant was impacted by COVID-19 and was since extended to this year. The plan will also focus on Ohio's Science Learning Standards to engage students in problem-based learning activities that consider the impact of healthy water on the amphibian, which is an endangered species native to Northeast Ohio. Students will take field trips to Beaver Creek State Park and Highlandtown State Park to record data and later present their findings on the importance of healthy water as well as potential challenges and solutions.

Bennett said the elementary and high school students will work together and learn real problem-solving tactics while they will show their findings at a year-end celebration of learning on May 18.

“We’re really excited to see what you are going to come up with for the celebration of learning,” she said. “Especially how you can improve it for the area and wildlife in general.”

Emanuelson described the plight of the Eastern Hellbender Salamander, saying it generally lives for 25-60 years but its population has been greatly declining for the past four decades.

“It’s only been studied for the past 35 years but is on the endangered species list in Ohio,” he added, noting they were not on the federal endangerment list. “We’re looking at an 82-percent decline in population since the 1980s.”

He shared some details on the salamanders, saying they are the largest in North America and third largest in the world, eat crayfish, small fish and possibly smaller salamanders and can grow to more than 24 inches long. They are found locally and live under rocks in the waters of Little Beaver Creek and its tributaries, but their existence has been impacted through such events as collection since they are a rare species, construction of dams, decrease in water quality or quantity, conversion of forests to farmland and home development and excessive siltation (soil runoff). Emanuelson challenged the students to locate a farm field or other local area to research the watershed, particularly if water quality is being affected, and to help solve the puzzle and remove the creatures from the state’s endangered list.

Elementary students have already begun learning about the salamander so they are getting prepared for the task at hand. Science teacher Karen Marquis rallied the pupils, saying they will study rainfall, water quality, land conditions and other aspects to ensure the animals will endure.

“Over the next few days, we will map water fall on the grounds and when it rains, we will go to the places we’ve mapped and see the rainfall,” she continued.

Officials said test kits will be available at Beaver Creek State Park and the high school students will assist in the process.

“When new find out what’s going on, we’ll see if we can figure out how to solve the situation,” Marquis said. “We will test, analyze and come up with a solution.”

Josh Emanuelson, Little Beaver Creek Watershed coordinator for the Columbiana County Soil and Water Conservation District, addresses Southern Local fifth-graders and juniors who will partner for a study on the population decline of the Eastern Hellbender Salamander. The amphibian is currently on the state endangered species list and students will record data and seek solutions to bring the salamander back from the edge of extinction. The project is a joint effort between the Columbiana County Educational Service Center, which secured grant funding, SilverApple Inc. and CCSWCD and also involves students in the Crestview Local School District. Findings will be presented at a celebration of learning event in mid-May.